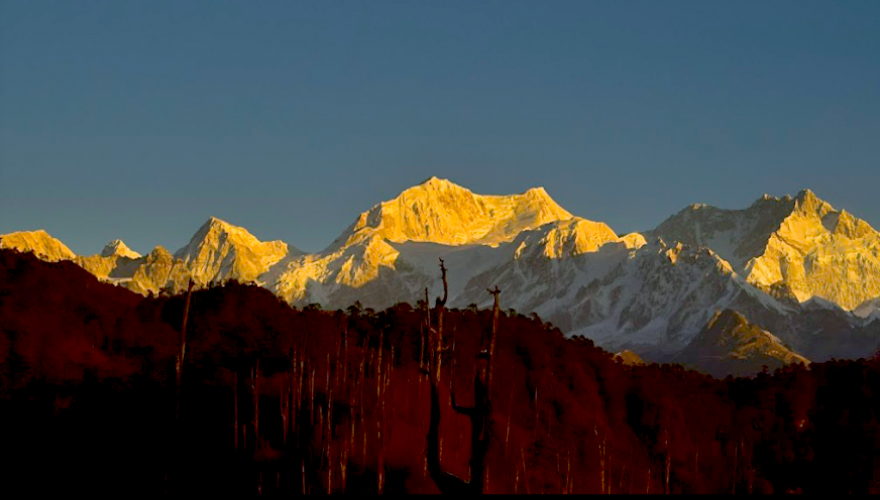 An enigmatic beauty, the Bajre Dara trek in Sikkim offers insight into the fascinating aspects of Nature. If you are keen on exploring the enticing mountains, then trekking is the most suitable option. Sikkim is all about picturesque destinations but the state doesn't have many trekking trails. Bajre Dara is considered to be an interesting trail as the trek offers an uninterrupted view of Mount Kanchenjunga and on a clear sunny day, you can also catch a glimpse of Kabru, Janu, and Pandim.

Bajre in Nepali means a place where thunder strikes frequently, whereas Dara means a ridge. Today, trekkers will find remnants of thunder-stricken dead tree trunks. There are many stories behind this name. Some people say that a thunderbolt had burnt the complete vegetation of the area while others believe that the local people had burnt all the vegetation to protect their lands from foreign invasion.

The ridge stands at an elevation of 11,000 ft and provides respite from the usual humdrum of city life. The trek commences at Melliaching, a small hamlet 17 kms away from Pelling. From here, you need to trail to Bhanjyang via Pangreytar and Gorujurey. Camping at Bhanjyang will let you witness the raw wilderness of nature. The next day, trek to Bajre Dara- the cardinal point of the trek. Experience the best part of your trekking experience here. The panoramic trail is indeed life-changing and a treat for your sore eyes. On the following day, descend to Pangreytar via Gorujurey and on the last day trek back to Melliaching. From here, drive back to NJP/Bagdogra or back to Pelling. Get ready for a pristine and life- altering trekking experience.

Day 1:DRIVE FROM NJP/BAGDOGRA TO MELLIACHING VIA PELLING AND DARAP (150 KMS/ 7-8 HOURS)

Arrive at NJP/Bagdogra where our representatives will be there to escort you. Then, take a 7-8 hours drive to Melliaching via Pelling and Darap. The journey is all about freshness and rejuvenation. Witness the most beautiful and variegated valleys, mountains, tea gardens, bamboo trees, and cardamom gardens. Breathe in the natural air and let the cool breeze gently soothe your skin as you traverse through the ethereal mountains. Put up at a hotel and spend the night there.

Day 2:TREK TO BHANJYANG VIA PANGREYTAR AND GORUJUREY (10 KMS/5-6 HOURS)

Today marks the first day of your trek. After breakfast, start your trail from Melliaching to Bhanjyang. The entire trek is about 10 kms and takes around 5-6 hours. We will trail through the ancient monasteries of Pangreytar and Gorujurey. Hence, it is needless to say, that this adventure is not just about natural beauty but also about religious serenity. If you reach on time, you can also catch the waning lights of a mesmerizing sunset. Spend overnight at base camp at Bhanjyang amidst surreal mountain views and spectacular weather.

Today is the day of ultimate bliss, the pinnacle of your entire journey. Today is the day when you will course your way to Bajre Dara. The trek will take through one of the most enchanting and romantic views imbued with snow-capped mountains, tropical rainforest, rhododendron flora, and faunas like barking deer and musk deer. Get the chance to view the unending stretch of Mount Kanchenjunga. Do not forget to click plenty of pictures while you are here. Spend overnight at camp.

Today, you will start your descent. Take the same route from Bajre Dara back to Pangreytar via Gorujurey. So in case, you had missed out on anything before, here is your second chance to explore these places again and collect snippets of memories. Spend overnight at camp.

The trek ends today. Return to Melliachang and take a drive back to NJP/Bagdogra or Pelling. Return with instilled hopes, longing, and a fresh new perspective of the world. In this weirdly transient world where everything keeps changing every day, memories are our constant companion and the driving force of life. Ashmita Tour and Treks hopes to impart you a handful of memories to last a lifetime. Join us at our Bajre Dara trek to seek the divine forces of the Universe. Connect with us today.

Bajre Dara trek can be undertaken in two different seasons each having its own beauty. The first season ranges from March to May and the second season is from October to February. March to May is the season of Spring and early summers which means it is the peak flowering season. You can witness the best natural and colourful sights as the entire scenario will be steeped in greenery and vibrancy. From mid-October to February, you will be greeted with the winter sky. Trekking amidst foggy mountain views is truly enchanting and the cold weather lowers the chances of physical exertion too.

Bajre Dara Trek instills a new perspective, a sense of belonging, and hope. Ashmita Tours and Trek works to bring you closer to these various cosmic epiphanies. Engage with us today and embark on this truly enchanting experience of a lifetime.

Avail a train or a flight to reach NJP or Bagdogra Airport. There, our representatives will escort you via a car drive to the trek base point Melliaching.

Permit requirements for travelling and trekking in Sikkim

Sikkim being a border state sharing its boundaries with 3 other countries. The foreigners are required to obtain ILP for security reasons. The numbers of the Tourist Information Centers are listed in If you are planning for extended holidays/destinations in Sikkim then check a complete guide Sikkim visa information. Note that even Indians need Protected Area Permit (PAP)/Special permits for visiting entire North Sikkim/Nathu La etc. and parts of East and West Sikkim.

For Indian Nationals: No special permit is required for this trek . Carry an original Photo ID card with address proof on it (Aadhar/Driving Licence/Voter ID/Passport but NOT PAN CARD) & 2 photocopies of the same each person.

For Foreign National including OCI Holder:

Foreigners require an Inner Line Permit (ILP) to enter Sikkim (Indians don’t). These are free and getting one is a formality, although to apply you’ll need a passport 2-4 -sized photo and photocopies of your passport and India Valid visa on arrival (show the original too). You can usually apply on the spot at the entry checkpoints at. Rangpo  Checkpost ( East Sikkim) - issued between 8am to before 8pm .Melli  Checkpost for West Sikkim Pelling – Yuksoom - issued between 8am to before 8pm. Note : If you are a national of Pakistan, China, or Myanmar, then it gets a little more difficult to enter Sikkim. You must get a written approval from Ministry of Home Affairs, Government of India, New Delhi before the Restricted Area Permit can be issued.

Foreigners will NOT require PAP/Protected Area Permit (special Trekking Permit) for this trail. Here is the Sikkim Official portal. > https://www.sikkimtourism.gov.in/Public/TravellerEssentials/pap

Normally the permits are issued for a duration of fifteen (15) days for the specific purpose of tourism only. Once in Sikkim these permits can be further extended for 30 more days in two spells of 15 days each. These extensions are granted only at Gangtok by State Home Department.